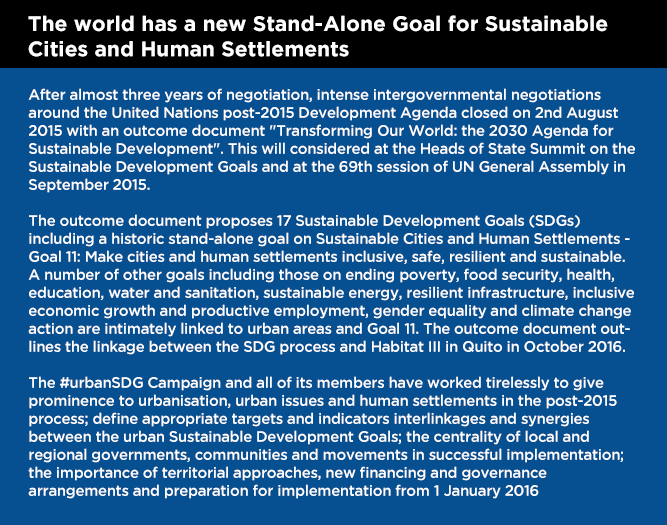 The Millennium Development Goals (MDGs) adopted by UN member states in 2000 have successfully focused world attention and action on ending extreme poverty in all its forms. The fifteen-year MDG period will be completed at the end of 2015. Participants at the Rio+20 Summit in June 2012 resolved to finish the job of ending extreme poverty and hunger as a matter of urgency, and to place poverty reduction in the broader context of sustainable development.

Urbanization will be the defining trend over the next several decades. Today, 50% of the world’s 7 billion people live in cities, and, by 2050, this will rise to 70%. Cities are home to extreme deprivation and environmental degradation with one billion people living in slums. At the same time, roughly 75% of global economic activity is urban, and as the urban population grows, so will the urban share of global GDP and investments.

The Campaign for an Urban SDG has been launched because the dynamism of cities represents a major sustainable development opportunity and we believe that a dedicated and stand-alone urban SDG is essential to mobilize stakeholders, promoted integrated, city-level approaches, and accelerate progress towards sustainable development, including the end of extreme poverty.

We hope the learners completed all the modu… https://t.co/BE7A5r16Od

Can #SustainableCities solve our urban problems? In the free online course, #learn from experts about the role of p… https://t.co/4r57k2oELI

Can #SustainableCities solve our urban problems? In the free online course, learn from experts about the role of pr… https://t.co/bR5W0hgs7u

How can law and order enable a safe environment for cities to flourish?

Learn more in Module 2 of… https://t.co/xESBcnSTGH

Learn more about these challenges in the free online course by @SDG_Academy, curated by #IIHSin on @edXOnline.

Module 2 of #SustainableCities starts today!
The module focuses on how cities function and the key role they play i… https://t.co/Ahea7fNbdM

📢 Be part of the conversation on #urbanSDG’s & #futurecities! #AsiaPacific #Urban Forum kicks off tomorrow and we e… https://t.co/IPCj2jnkby

Enrol for the course today to learn from global experts: https://t.co/JywHAO3Ov6.

Register now for the free online course, to learn the latest content from urban specialists:… https://t.co/C8G7dTgE7s

What makes a city sustainable? Find out from the world’s leading experts in the field in this free @edXOnline cours… https://t.co/kk7suuAbhH

Seeking YOUR opinion! 🏙️ What #urbanSDG topics do YOU want to see being discussed at the #AsiaPacific Urban Forum i… https://t.co/nq2DY0eh7P

Enrol now for this free online course by @SDG_Academy and #IIHSin on @edXOnline to learn from global thought leader… https://t.co/22iekzytVp

Cities are the most productive places on the planet. If you want to know how to make cities inclusive, productive &… https://t.co/JFPZzPBQ2G

The course also provides learners an opportunity to acquire an understanding of the challenges in monitoring & meas… https://t.co/9SWBclbn01

Want to learn more about how urbanisation, sustainability & #climatechange are critically linked?
Enrol for the… https://t.co/OR8dw37bh5

The free online course is open to anyone who has a keen interest in making cities more sustainable. It is conducted… https://t.co/rCGkI4KKd2

The free online course is open to anyone who has a keen interest in making cities more sustainable. It is conducted… https://t.co/90GWvLjfni

Can #sustainabledevelopment be enabled & implemented in our cities? Learn more about institutions & individuals who… https://t.co/HIbpnmroAC

How can we build resilient and inclusive services & infrastructure in our cities? Join the #SustainableCities, a fr… https://t.co/ogmgRrctnw

Who can enable & implement #sustainabledevelopment in our cities? Learn more about the institutions & individuals t… https://t.co/zrK91fE94w

Get a ring seat view of #UrbanSDG & #NUA implementation via #NationalUrbanPolicies and other innovations from one o… https://t.co/NR7x6k1s3m

Mayors commit to the SDGs

City officials from around the world will attend this month’s Sustainable Development Goals summit to pledge their critical support for the new framework.

SDSN Releases “Data for Development: A Needs Assessment for SDG Monitoring and Statistical Capacity Development”
The discussion on the Sustainable Development Goals (SDGs) has renewed interest in strengthening the quality and availability of statistics for management, program design and monitoring performance. The Financing for Development Summit in July 2015 presents a crucial opportunity to make the case for increased investments in development data, but to do so the statistical community need agree upon a robust estimate of resource needs.
More Information

IHS to host open Workshop on Sustainable Development Goal May 20th
The Institute for Housing and Urban Development Studies at Erasmus University Rotterdam will host a meeting of Urban Academics, Experts and Practitioners on May 20th.  The meeting aims to gather academics and practitioners on urban matters from across Europe to discuss the old and new challenges for urban capacity development in the context of sustainable global development.
More Information